Crazy is my superpower by AJ Mendez Brooks 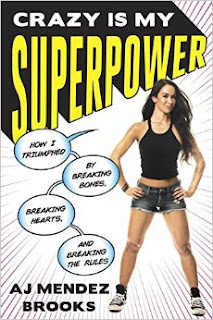 Recently retired WWE superstar AJ Mendez Brooks is a powerhouse—strong, quirky, and totally confident. But that wasn’t always the case. With humor and tremendous heart, she opens up for the first time about her harrowing struggle to understand her demons and the diagnosis that helped her gain control over her life.

I wasn't a WWE fan for long, but in the time that I was I both loved and hated AJ Lee's character. I adored her that we had a female character to watch who was short and spunky and seemed real, and then later I detested the way they had her character become the crazy girl, the butt of every joke. I expected this book would cover more of her time as a wrestler. I was pleasantly surprised to find out this wasn't the case. The book is an in depth look into her childhood and past. You get to see her use her mother's struggles to help her grow. You get a glimpse into how dark her life could have turned out. She does talk a bit about wrestling, but she treats it like you would treat any job, so it doesn't become the focus of the story. I liked her honesty and bravery when talking about her bipolar disorder, and how she doesn't act like it's something she should be ashamed of. So often mental illnesses are stigmatized, and those who suffer aren't able to be so open and honest about them. AJ's writing is engaging, she speaks passionately, and her book is a good read. I would recommend it to anyone, WWE fan or not.

I recived this book for free from Blogging for Books in exchange for my honest review. My thoughts and opinions are 100% my own. 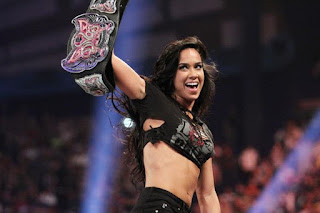 Welcome! I'm Shay, owner/writer for this blog. I'm a single mom living in sunny Southern Oregon. I blog about life, motherhood, life as a spoonie, recipes, and product reviews.